Wow, hello Karate Homework readers! If you want more monsters like the Monster Portaits you see here, have I got news for you! I'm doing a whole project of them on Patreon called
BRIEF INTERVIEWS WITH HIDEOUS MONSTERS 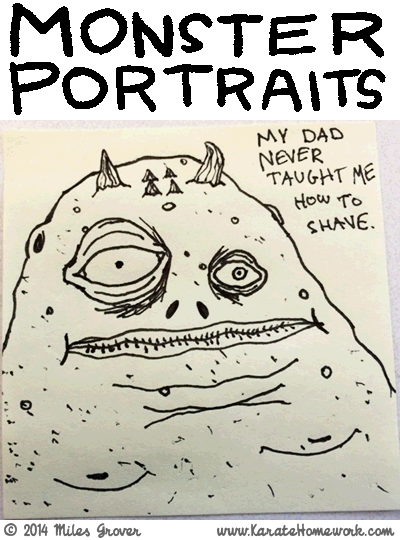 Hope everyone had a happy bunch of holidays! I've got a lot more monster portraits coming, so if you like those you're in for ... a bunch more of some things you like!

Hey everybody! Been a while. So here's a new thing I've been doing. When I get bored in meetings at work, I draw little portraits of monsters on a post-it note with quotes from their life.

I've left a bunch of these around in conference rooms, and people seem to enjoy them. I hope you also do. Enjoy them, I mean.

Oops! I kinda forgot to post anything for a while. My bad, bro.

If this comic looks familiar to you, it might be because it's a remake of Newton Jacuzzi from the old Thinkin' Lincoln days.

Sometimes I read old comics and I'm like, man this could be better. What were you thinking Miles. So I decided to redo this one! NO ONE CAN STOP ME. I'VE GONE MAD WITH POWER.

@matsie on Twitter asked for a high res version of the missing Mewsevelt poster from the previous comic, so here it is: HAVE YOU SEEN MY CAT

Enjoy! IF SUCH A THING IS POSSIBLE.

What is this thing?